Melnik is located an hour and a half away from Bansko. But at the end of the day, every minute spent in the wild at this beautiful end is worth it. Whether you choose the road along the Struma Highway or through Dobrinište and Gotse Delchev, you will become seen to uniquely beautiful natural views.

Melnik is popular mainly for two things. It is the smallest town in Bulgaria and vineyards are grown in the surrounding area for the preparation of the famous Melnik wine.

Why is Melnik so popular with his wine?

Melnik is located in southwestern Bulgaria, whose climate is very similar to the Mediterranean – high temperatures, dry weather, poor soils, hilly terrains. All these features are actually the best prerequisites for growing rich vine crops. And accordingly, the development of wine-viticulture in the region, which began from the time of the Thracians. The area of the vineyards in the region around Melnik is not so large, limited by the relief and rocky soils. But the grapes that are harvested from them are extremely qualified, of the highest class.

The wine, which is made from the unique Bulgarian variety Shiroka Melnishka vine, has a magnificent quality, with aromas of ripe cherry, herbs, and in the presence of oak develops shades of tobacco and leather. It is one of the attractions of the city and the region and attracts many admirers from all over the world. You can taste it in one of the wine houses and cellars in and around the city. The combination of fine wine and superb local cuisine makes Melnik an excellent destination for gourmet and wine tourism, which offers guests many interesting sights.

The first written information about the Melnik fortress refers to the beginning of the XI century. The first settlers on the territory of modern Melnik were the Thracians, namely the Thracian tribe Madi, from which the legendary rebel Spartacus originated. A few centuries later, Romans lived on this earth. This proves an ancient Roman bridge, which to this day is preserved in the town of Melnik. The Slavs, who subsequently inhabited this territory, called their village Melnik because of the surrounding sand pyramids. The name comes from the Slavic word “mel”, which means white clay, chalk.

In 1215 Melnik became the capital of an independent feudal principality ruled by despot Alexius Slav. The ruins of its fortress are preserved to this day near the city. In 1395 the Bulgarian lands, as well as Melnik, fell under the Ottoman rule for 5 centuries. Melnik remained within the borders of the Ottoman Empire until 1912.

In the 18th century, in the age of the Bulgarian Revival, the city stood up for a new life. Melnik becomes a colorful, significant in size and population city, with a large market. Local traders sold their goods in Budapest, Vienna, Genoa, Venice. Melnik is famous all over Europe and with its fine wine, which it is famous for today. The Rozhen Monastery, located 5 km east of Melnik, is established as the center of spiritual life in the region. It is the largest Orthodox monastery in the Pirin Region. The monastery is relatively well preserved to this day and every year is visited by many tourists from different countries. The monastery holiday is on September 8, when people from all over the region gather to participate in the festivities.

During the Ottoman rule, Melnik was a large administrative center. In the city, there was a Turkish barracks, which carried out its administrative functions in the so-called ” Turkish konak – the then police station. This building is preserved to this day. It is located in the center of Melnik opposite the city library.

Since the Renaissance era is also the brightest architectural monument, testifying the economic upturn of the city at that time. One of the oldest houses on the Balkan Peninsula is the Bolyarska House (declared an architectural monument in issue 32 of the State Gazette since 1965), which was the residence of despot Alexius Slav. In the middle of the XIII century, part of it was burned down and destroyed, and in the following centuries, it was restored and reconstructed. At the end of the XVII century it was broken in some sectors, but at the beginning of the XVIII century underwent a major reconstruction related to the construction of an attic floor and a clock tower that lasted until the beginning of the 20th century.

Two other architectural monuments from the Renaissance are Kordopulova and Pascoe’s House.
Kordopulova House (declared an architectural and construction, artistic and historical monument in issue 25 of the State Gazette since 1998) is the largest Revival building in Bulgaria. It was built in 1754 and belonged to the rich Melnik genus Kordopulov, who were engaged in winemaking. The cellars carved into the rock below and behind the house, with its constant temperature and ventilation, were used for the preparation and aging of the famous Melnik wine.

The Pascoe House (declared an architectural and artistic monument in issue 25 of the State Gazette since 1998) was built in 1815.
From the former famous city with a population of 7-8 thousand. residents, with about 1300 residential buildings, today Melnik is the smallest city in Bulgaria with about 208 inhabitants.

Another interesting landmark is the remains of the Metropolitan Church of St. Nicholas near the town of Melnik, in the central part of St. Nicholas Hill. Only the eastern wall and several elements of the interior of the church are preserved.

The Monastery of St. Spileotissa” is located in the eastern part of the elevation st. Nikola, south of the town of Melnik. It is one of the valuable cultural and historical monuments of the city. The monastery was built in a hard-to-reach place at the beginning of the XIII century on the orders of despot Alexius Slav. Today the monastery is partially operational.

Near the town are the Melnik Pyramids, declared a natural landmark. They are a unique natural entity that attracts tourists from all over the world. It is believed that this kind of pyramids acquired during the erosion of clay soil. The Melnik pyramids are in the process of being the layout and their appearance and shape change over time. Besides the pyramidal shape, sand formations have the form of mushrooms, cones, needles, etc. The height of the pyramids reaches 100 m. The characteristic of the Melnik Pyramids is that the slopes are sandy, in places completely vertical, and on the peaks grow deciduous plants and grasses. 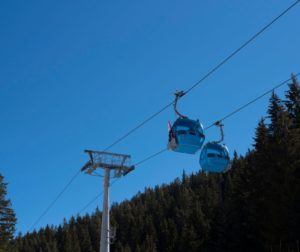